Household work was transformed by new technologies during the first half of the twentieth century. Some machines were intended to automate work that servants used to do, while others took advantage of new sources of energy such as electricity and gas to make homes cleaner, safer, and more efficient. Technological innovations such as refrigerators, washing machines, and ranges were first available only to the wealthy, but after the end of World War II household appliances became widely affordable. Household appliances have not eliminated time or effort spent on domestic chores, but they have helped dramatically raise the general standard of household comfort and convenience.

While many of the activities that took place in homes at the turn of the twentieth century would still be familiar one hundred years later, how those tasks were performed changed dramatically. Before 1900, nearly all household chores were performed manually. Affluent homes employed servants to assist in cooking, cleaning, and other tasks; other chores, such as laundry, were sometimes performed outside the home. But the first decades of the twentieth century saw a great decline in the number of household servants, and women in the upper classes were faced with the challenge of performing laborious household chores themselves. This created a marketplace for new automated appliances for the kitchen and throughout the house. Poorer women, on the other hand, had always been responsible for their own housework, but, as electricity became available and prices for appliances fell, they too were able to welcome gadgets large and small into their homes.

One of the most important home technologies of the early part of the twentieth century had nearly disappeared by its end: the sewing machine. Early sewing machines were powered by pedals or trestles that the operator pumped with her feet. This was tiring work, and made machine sewing often seem a greater chore than simply sewing by hand. Singer, the world’s largest sewing machine manufacturer, introduced a fully electric model in 1921, and the popularity of sewing machines for the home soared. These machines made basic sewing chores much easier, and also performed elaborate specialized stitching previously beyond the reach of domestic sewing. The popularity of sewing machines began to decline after World War II, however, as inexpensive clothes and household linens became widely available for purchase and made home sewing unnecessary.

The chores of cleaning homes and clothes were changed perhaps more than any other by the use of electricity. Prior to the invention of electric-powered cleaners, homes were swept by hand or with the aid of mechanical carpet sweepers. By all accounts, these manual techniques left a great deal of dust and dirt behind! The first electrical carpet cleaners were not portable machines for the home, but large commercial machines that were brought to the home for periodic cleaning sessions. These were followed by permanently installed centralized vacuuming systems, where light hoses could be attached to suction outlets on the wall in order to easily vacuum any room. These centralized systems were popular in apartment buildings, where the large, expensive units were most practical. The earliest version of the modern style portable vacuum cleaner appeared in 1908, manufactured by the W. H. Hoover Company and soon to be known simply as “Hoovers.” Hoover and his competitors continued to improve the vacuum cleaner, though the basic design—a small motor, suction, a dust bag, and perhaps a rotating brush—remained the same for decades.

Machines to help do laundry were especially important to households no longer able to rely on domestic help. Many women were reluctant to make use of commercial laundries because of their persistent bad reputation for abusing clothes and linens, so even manually operated laundry aids were desirable. Early machines consisted of a cylindrical tank that filled with water, a gas heating element, and a hand crank to turn the cylinder. Clothes could be washed, rinsed, and (slowly) dried in these machines. With the addition of electric motors to washing machines, their popularity skyrocketed; by the late 1920s, millions were sold annually in the United States. Washing machines became fully automatic in the 1930s with the introduction of electro-mechanical controls and the ability to “spin-dry” clothes. Another laundry aid that became electrified in this era was the iron. Electric irons for the home were first introduced in 1904.

Kitchens were completely transformed in the first decades of the century with the introduction of gas power. Stoves powered by coal, wood, or other solid fuels had to be lit well in advance of use. The heat could not be easily controlled, and they were often smoky and messy—homes were routinely covered with a layer of grime produced by stove exhaust. Gas stoves came into use rather slowly beginning in the 1890s, but were quite popular by 1914. Manufacturers made their gas stoves more and more elaborate while at the same time improving their safety and convenience. Gas stoves continued to outpace their electric competitors in popularity for some time, although the opposite was true for refrigerators. There, electrical machines were introduced early (they were widely available in the United States by the 1920s, replacing older non-electric “iceboxes”) and took over the market. Gas powered refrigerators, although quiet, safe, and efficient, failed ever to become commercially successful.

While large appliances were important to reducing manual household work, numerous small electrical gadgets were introduced at the same time. Some, like toasters and fans, came to enjoy perpetual popularity. Others were curious hybrids, like an iron that also made tea, that failed. Still others, like machines designed to mix or mash food, went through decades of evolution and modest success without ever becoming indispensable kitchen aids.

Of course, not all technologies in the home were intended to assist in household work. Some were for personal comfort, others for entertainment. Bathrooms saw significant technological improvements in this era. Effective flush toilets with elevated cisterns were perfected late in the nineteenth century, and were gradually improved, becoming more compact and decorative. Mass-produced enameled bathroom fixtures—toilet, bathtub, and sink—began to be produced around 1916, and this helped bring fully appointed bathrooms into even modest homes. Entertainment in the home was transformed by a series of electrical devices, including the phonograph, the radio, and the television, as well as more specialized instruments such as the very popular electric organ.

These new technologies changed life and work at home, but not always in the manner they promised. Many, if not most, new devices for the home were marketed to prospective consumers with the promise of saving effort and of making housework more efficient. While some manual labor was saved (for example, it was physically easier to wash laundry in an electric machine than in one with a hand crank), little time was saved by the new inventions. Household technology did not give women the freedom to do other things besides housework; in fact, by providing machines to do work such as laundry in the home rather than outside of it, many sociological opportunities to reduce housework were lost. The net effect of fewer servants, fewer services like home deliveries, and more household machines left middle and upper class women doing more housework in the middle of the twentieth century than they had been doing at its start.

The affluent years after World War II saw a flood of new home construction and new household technologies as well. By this time, nearly all homes in the United States had running water and electricity service. Improved and less expensive versions of washing machines, refrigerators, electric stoves, and small appliances proliferated, and standards of cleanliness and comfort that had been unattainable for all but the wealthy came within the reach of almost everyone. Brand new appliances appeared, such as air conditioners, tumble dryers, freezers, and dishwashers, and became widely available in the 1950s. New home entertainment technologies such as television sets, “high-fidelity” stereo systems, and portable transistor radios also attracted postwar consumers.

While the home technologies of the years 1900-1949 were mostly designed to save labor, in the aftermath of the energy crisis of the 1970s engineers worked to design machines that would save energy. High divorce rates and other demographic changes in the 1980s found most women working outside the home. This created a powerful demand for technologies that saved not only labor but—finally—time. Microwave ovens, wrinkle-free fabrics, frost-free refrigerators, and self-cleaning ovens all helped save significant time performing daily household tasks. For home entertainment, video tape recorders gave people more control over their recreational television viewing time, by letting them tape programs or watch films at their own convenience, and personal cassette players (such as the Sony “Walkman”) made music listening more flexible as well.

In general, household technologies have made homes safer, cleaner and more comfortable; they have also made the preservation and preparation of food more convenient. But as new technologies have been developed to perform traditional tasks in the home, they have actually changed how we live. Freezers have encouraged the consumption of prepared food, air conditioners have made awnings and front porches uncommon, vacuum cleaners helped make wall-to-wall carpeting popular. While household technologies have greatly improved the general quality of life in homes of all kinds, there have also been unintended consequences. Lifestyles have evolved alongside technologies, each influencing the other, as we have become increasingly dependent on machines to perform even the most basic functions in our homes.

Top 16 today household chores have been made much easier by electrical tổng hợp bởi Lambaitap.edu.vn

The Top 9 Electricity Users In Your Home

Today, household chores have been made much easier by electrical

Today, household chores have been made much easier by electrical .

These days, housework has been made much easier by electrical .

The History of Electricity and the Technology Behind Your Everyday Appliances

Today, household chores have been made much easier by electr

Today, household chores have been made such easier by electrical

Xem thêm: Top 18 the staff are working at weekend 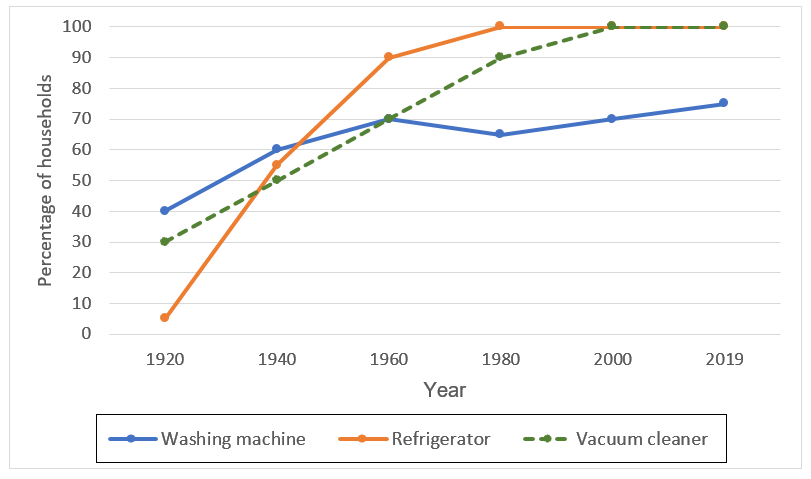 Today, household chores have been made much easier by electrical

Today, household chores have been made much easier

THEN AND NOW: How household chores have changed over the years