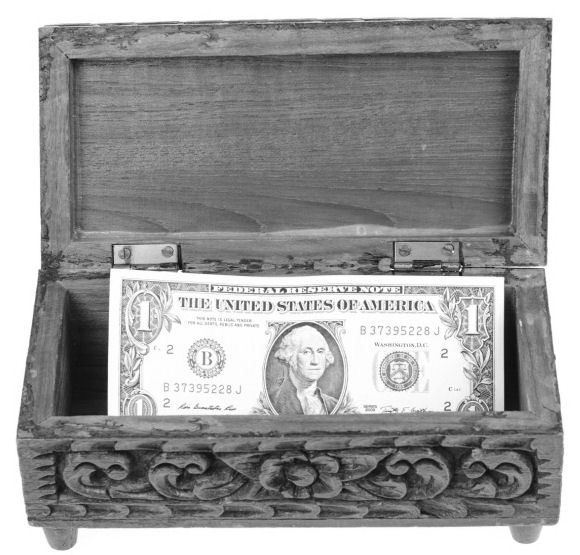 I want to tell you a story about a little boy who got up from the table where his older brother and mom sat, to go back to his room. He had a sudden need to count his money. As he walked in to his bedroom, he looked up on the dresser, at the round glass piggy bank. Inside that glass pig was his net worth. It was mostly pennies, which felt a little disheartening. He wanted to feel like he was worth more than pennies.

And he was. He reached for a smaller, less conspicuous wooden treasure box, hidden underneath merit badges and old detention slips. In it lay the rest of his money. Quarters and dimes he stashed away. A silver dollar he’d gotten for Christmas. And two one-dollar bills. It added up to just about five dollars. Not much, but not bad, either, for a seven-year-old in 1969.

That little boy stood over that small box of money for what seemed like an eternity. He was caught up in a powerful deliberation. A painful, sweating brow kind of deliberation. And although it may sound as though it was a financial deliberation, it really wasn’t. It was a spiritual one.

I know this story well because that little boy was me. I especially remember getting up from the kitchen table where my older brother and my mom were still sitting. We had been talking and the conversation we were having wasn’t finished. The subject, as you might have guessed, was about money. It had to do with how much we had—or rather, didn’t have.

Times were a little tight for us as a family back in 1969. The particular crisis I can’t remember, but there was a whole laundry list of items on the chopping block. And the tone of the conversation was rather serious.

The other details sort of blur together. But this part I remember clearly: at one point in the conversation, when my mom’s attempt to convey the seriousness of our situation really came through, a deep silence fell between us. It seemed there was nothing left to say.

And just at that moment, my brother got up and left the room. But he returned, just as quickly, holding a small box. My mom and I recognized it right away. It was his wooden treasure box of money, identical to the one I had. Inside was money from birthdays and mowing the lawn, washing cars, recycling coke bottles, Christmas. His box had almost fourteen dollars. He was better at saving his money.

My mom and I both knew what was coming. We braced ourselves. I stared wide-eyed, and felt a lump form in my throat. I looked over at my mom and noticed her eyes had begun to well up. A few minutes earlier, she had a lot to say about the money we didn’t have. But, when he took that box and pushed it over in front of her, she suddenly couldn’t say anything. Tears rolled down her face. And she didn’t do anything. She just let him push that box in front of her.

Trying to summon the benevolence and generosity my brother had just demonstrated, but unable to do so, I was trapped in doubt. And fear. And finally I closed the box and mumbled to myself: Well, five dollars is five dollars. I retreated further into my bedroom, and further into my heart.

It was difficult for me, deciding to hold on to that money. But not because anyone berated me, or responded begrudgingly. I don’t think anyone even knew I struggled in that kind of deliberation. The part that was the hardest—that made me feel most lost and adrift—was that I couldn’t even summon the courage to return back to the kitchen table. I couldn’t get myself to follow my brother’s generous example. And I didn’t believe I could show up without it. So, I just stayed in my room. Alone.

My brother wasn’t giving all his money because we needed it. He was giving it because he needed us. Because he wanted to feel part of something that he knew, deep down, was about love.

And my mom let him because she knew he wanted to know he was worth more than fourteen dollars. The money was just coins. What it bought was priceless.

The day my brother pushed all of his money towards us pushed me into a life-long spiritual deliberation. On that day when I couldn’t get myself to go back to the table, I entered a time of self-imposed spiritual exile. To this day, I can’t remember what I did with that five dollars. But I spent years wishing for the chance to go back and change that decision.

The price I paid – years searching for my own self worth, doubting my sense of belonging, questioning my contributions to love and justice – could have been covered by a small down payment early on. Though it would have cost me everything I had, it would have been the best five dollars I ever spent.

Top 11 five dollars all i have on me tổng hợp bởi Lambaitap.edu.vn

Can I have five dollars?

Cancer on Five Dollars a Day (chemo not included)

Five dollars ………all I have on me

Mark the letter A, B, C or D to complete the following sentences

“Inflation is when you pay fifteen dollars for the ten-dollar haircut you used to get for five dollars when you had hair.”

Five dollars ………all I have on me

Five dollars all I have on me